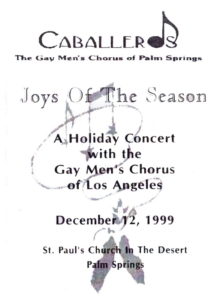 • 1999 – The Caballeros organized and debuted with twenty-four members, as a guest ensemble for the Gay Men’s Chorus of Los Angeles.
• 2000 Spring – Performed their first spring concert, P.S. I Love You.
• 2001 – The Caballeros performed a joint event with Vox Femina.
• 2001-2003 – The chorus presented three concerts per season in three different venues, Temple Isaiah, The Annenberg Theater, and the Palm Springs High School Auditorium.
• 2004 – The thirty member strong group traveled to Montreal for the first time to perform at the GALA Festival.
• 2004-2009 – The chorus grew substantially to seventy-five singers. Concerts were performed at the McCallum Theater, the Riviera Resort Hotel, the Palm Springs Convention Center, and Hotel Zozo (now the Hardrock Hotel).
• 2008 – Forty-five members of the chorus traveled to Miami to participate in GALA Festival 2008.
• 2011 – The chorus performed for the GALA Leadership conference at the Riviera Resort.
• 2012 – Thirty-five members traveled to Denver and sang at the GALA Festival 2012.
• 2013 – The Caballeros premiered Robert Seeley’s composition Metamorphosis. The chorus rebranded itself to the Palm Springs Gay Men’s Chorus to better identify with the community.
• 2014 – In the Fall Douglas Wilson, our current Artistic Director, was elected by the members to the position. Both our holiday and spring concerts were performed at Palm Springs High School.
• 2016 – Sixty members performed in Denver for GALA Festival 2016.
• 2016 – Three concerts were performed at the newly renovated Richards Center for the Arts at the Palm Springs High School.
• 2017 – 45 members of the Chorus performed in Las Vegas
• 2018- Mayor Rob Moon and the City of Palm Springs honored the Chorus with a Proclamation “The Official Gay Men’s Chorus of the City of Palm Springs and April 8 as Palm Springs Gay Men’s Chorus Day.
• 2018 – 48 member of the Chorus performed in Tucson Arizona along with 4 other choruses from Tucson and Phoenix. Over 360 voices were on stage together.
• 2019 – 12 Members of PSGMC sing with over 525 voices from choruses around the United States sing “Quiet No More” at Carnegie Hall in celebration and remembrance of the 50th Anniversary of the Stonewall Uprising in NYC’s Greenwich Village.
• 2020 – Doug Wilson announces his retirement after 7 incredible years with the Chorus.

• 2021 – Jerry R. Soria-Foust is hired as the new Artistic Director and premieres “Sparkle, Twinkle, Jingle” in his inaugural season. 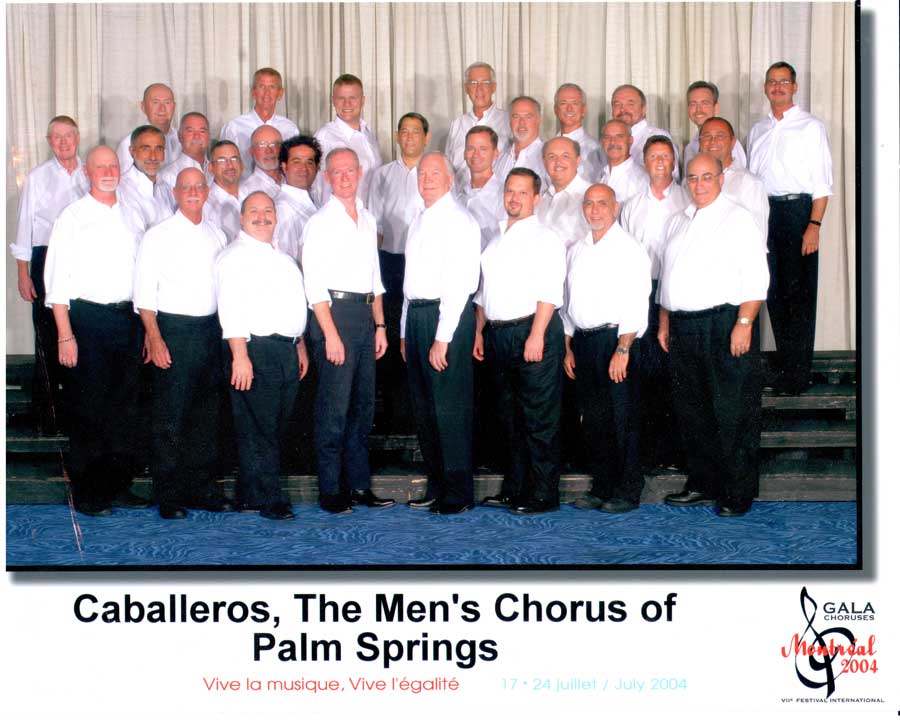 Though the name changed, the mission of the chorus remains the same: To be a chorus of gay men, who through musical excellence, community outreach, and civic responsibility, are dedicated to entertaining, inspiring, and educating the culturally diverse community in which we live.

Beyond our annual season of concert, the chorus sponsors or participates in a number of outreach events. Donations from these events help support the George Zander Memorial Anti-Bullying fund. Grants from this fund help support Gay Straight Alliances in the Palm Springs and Desert Sands Unified School District.

Guest performers at our concerts have included: Opera Soprano Janet Hopkins, renowned dance company Tango Nacional Argentina, Florence Henderson, and the hilarious Leslie Jordan. There have been memorable collaborations with other Gay and Lesbian Association (GALA) choruses such as the Gay Men’s Chorus of Los Angeles, the Gay Men’s Chorus of San Francisco, and Vox Femina. 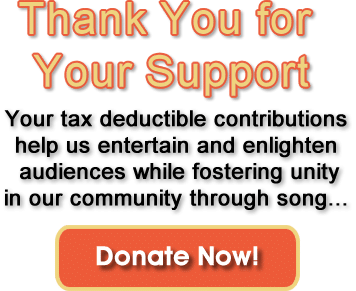 Let us send you the latest PSGMC news and happenings.
Page load link
We use cookies to ensure that we give you the best experience on our website. If you continue to use this site we will assume that you are happy with it.OkNo
Go to Top